SAN SALVADOR, El Salvador -- On sixth day of an 87-day mandatory confinement, the president of El Salvador, Nayib Bukele, broke with the motto "Stay at home."

Bukele announced a $300 subsidy for those most affected by a strict quarantine that began on March 11 as the government’s main strategy to combat the SARS-Cov-2 virus pandemic which causes Covid-19 respiratory infection.

To receive the much-needed cash, the President instructed people to search for their name on a web portal and if they didn’t appear in the registry, to file a claim in the scant 16 offices of the National Centers for Assistance and Administration of Subsidy (known by the acronym Cenade in Spanish) or fill out an online complaint.

The next day, there were long lines at banks and at Cenade. But the national centers were closed and the banks were still unable to make the transfers. Certain that with each passing day they would find even longer lines, people slept on the sidewalks. When the centers opened, they were crowded with thousands of desperate Salvadorans.

In a matter of hours, the president acknowledged his mistake."The Cenade are too full, the crowds are a risk of contagion for you and for your family," Bukele wrote on his social networks in response to images that showed streets packed with people who had abandoned social distancing.

Doctors, epidemiologists, infectious disease specialists and academics say the chaotic scene shows how political decisions in El Salvador disregard medical-scientific criteria during a pandemic that has claimed thousands of lives in Central America.

The first case of Covid-19 was reported in El Salvador on March 18, the same day that Nicaragua reported its first case. Meanwhile, Costa Rica had already registered its first death.

As the cases mount, doctors and scientists find themselves in the once unthinkable role of being dissident voices in the Salvadoran government's handling of the health crisis.

Although experts supported El Salvador’s early closure of its borders on March 11, they criticized the lack of a structured plan – quarantines, which in their opinion should be targeted, hospital care, transparency in the data, and testing for cases in communities instead of keeping patients waiting in hospitals.

"We see that these decisions meet political objectives. An expert would have advised them of another mechanism to deliver the subsidy,” said the president of the Medical College of El Salvador, Dr. Milton Brizuela.

Up to more than 400 cases of COVID-19 have been detected, per day, in El Salvador. Photo: MINSA.

Brizuela believes that authorities sought to hide the impact of the breakdown of the quarantine by manipulating data from laboratory tests.

At the beginning of June, through social networks, a memorandum was released that revealed that two Venezuelan advisers in the President’s office who worked on the Bukele campaign decided on the processing and delivery of Covid-19 test results, without having technical skills.

In a response to the media, the government acknowledged the existence of the two advisers but denied that they made decisions about the exams.

The government has refused to form technical round tables of specialists and to listen to other opinions. The president even chose to discredit dissenting voices.

“The Salvadoran Association of Infectious Diseases has made its knowledge and collaboration available, but unfortunately we have not been called. Here the political criteria have prevailed in 80%, and the medical-technical in 20%”, said its president, Dr. Mario Gamero.

"A characteristic is the absence of scientific criteria ... almost everything is done by political impulse," said Picardo, who Bukele called "crazy" and "imbecile" after Picardo presented his Intelligent Epidemiological Fence strategy to reduce Covid-19 contagions.

For specialists, the absence of active epidemiological surveillance in the communities is unacceptable, given the experience of health personnel with campaigns against measles and influenza in this country of 6.4 million inhabitants.

Salvador’s Minister of Health, Francisco Alabí, replied to his detractors by deflecting their criticism. "Since they believe that this is a political issue, they should be asked the same question," he said in a brief statement to Conexión Centroamericana.

During a brief interview on June 9 outside a television network, Alabí called it "an error" to say that there is political management of the health crisis. He failed to respond to a request by Conexión Centroamericana for a formal interview.

No one knows who is providing the Bukele government with medical and scientific advice. Alabí has only indicated that he hired Venezuelan experts.

Amid this silence, the Medical College of El Salvador launched the Covid-19 Medical Observatory.

The Francisco Gavidia University, the University of El Salvador, the Higher School of Economics and Business and the Foundation for Economic and Social Development formed the Covid-19 Observatory.

Bukele’s first health emergency measure came on March 11 with the suspension of classes and the closure of the borders and international airport in order to prevent the spread of the virus.

In a nationally televised address on March 21, Bukele -- surrounded by his cabinet and the delegate of the Pan American Health Organization for El Salvador (PAHO) -- announced a strict quarantine which he justified with a mathematical projection of 3,145,728 cases by May 20, calculations that were harshly criticized by experts.

After almost three months of confinement, amid allegations of human rights violations and lack of transparency in the use of resources, the confinement of the Salvadoran population concluded on June 14.

A 90-page resolution by the Constitutional Chamber of its Supreme Court of Justice declared the illegality of the decrees issued by the government and the laws approved by the Legislative Assembly that established a legal framework for the quarantine.

In their conclusions, the magistrates asked the federal government and the Legislative Assembly to reach an agreement on a law to deal with the pandemic.

The government and the Assembly spent six days in discussions without being able to agree on a law on mandatory quarantine, among other measures. In the midst of that debate, the President issued a controversial executive decree that established a roadmap for the first of five phases of the economic reopening.

On July 7, the date set for the second phase of reopening, the government announced that it would be postponed until July 21. The reason: cases had increased by almost 50% while the deaths had surged 80% during those three weeks of freedom.

The Executive Branch blamed the Constitutional Chamber and the Legal Assembly for those numbers, for bringing down the mandatory quarantine, in a discussion marked by partisan visions.

At press time on July 25, El Salvador had registered 14,630 accumulated cases -- 42% in its capital, San Salvador -- with 390 deaths, according to figures from the Ministry of Health of El Salvador. 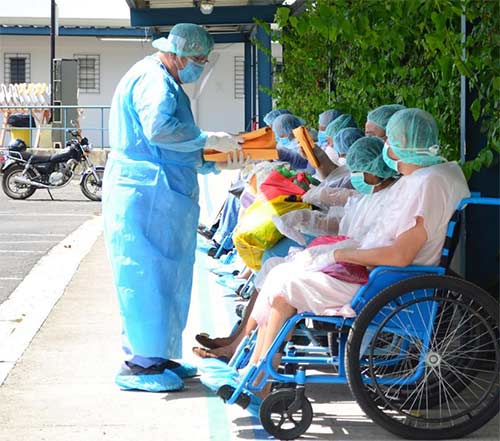 Before the avalanche of cases -- El Salvador is on the list of countries with community transmission -- the two observatories and the Salvadoran Association of Infectious Diseases of El Salvador advocated active epidemiological surveillance in the municipalities that reported the highest number of patients.

“It is clear to us that isolation is a measure, but it does not have to be the only one,” said Dr. Brizuela, the president of the Medical College.
“Active surveillance is the method that will avoid contagion among people … We cannot completely shut down the country and do nothing else. If they are going to quarantine, they have to be targeted and that is contemplated in the Health Code,” Dr. Brizuela said.

"To think that they will keep us in quarantine until the virus disappears is not an appropriate medical concept," added Dr. Solano.

In a country where the health care system is precarious, doctors said the federal government should have opted for field hospitals in addition to building the Hospital El Salvador.

With an investment of $25 million, the first wing of Hospital El Salvador, which was built in three months, only has 105 intensive care beds and 295 intermediate care beds. When it is completed in August, the medical facility will have 2,000 beds, making it the largest hospital in Latin America.

Bukele inaugurated Hospital El Salvador on June 21. No sooner had the President formally opened the medical facility than it began to fill with Covid-19 patients.